At the National Theatre 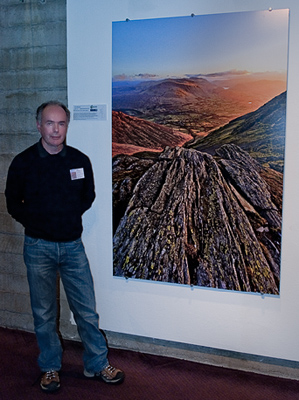 National Theatre Exhibition
Feeling slightly intimidated being photographed beside a large format print of my National Parks Award winning image of a sunset from Blencathra. This was one of two of images I am lucky enough to have on display at the 2009 Take A View Landscape Photographer of the Year Exhibition. The private view and awards event for exhibitors was held at the NT on 10th December. The public exhibition is free and runs for 6 weeks until 24 January 2010.
It was interesting to stand in front of the large print shown above as the size of the foreground rock in the print was similar in scale to the real thing so it brought back quite vivid memories of taking the photograph. The only difference was this time the temperature was not at freezing point and I was not facing into a howling gale!
The image was included in the LPOTY Book published on 31 October and be displayed in the 6 week exhibition at the National Theatre.

With a total prize fund exceeding £20,000 and the publication of a full colour book of Best Entries, Take a view is an important annual competition for photographers and this year attracted 18,000 entries.
Next
Previous