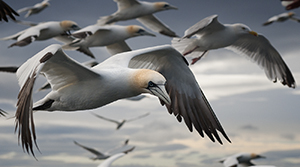 Flight
This image of Gannets and Gulls in flight near Bass Rock was shortlisted as a possible category winner (On The Wing) in the 2010 Outdoor Photographer of the Year competition. This image was captured from a boat on a trip to land on Bass Rock. Unfortunately the sea was too rough and the landing aborted but at least we had the opportunity to get some shots of the birds in flight.

Update: Dec 2010. Although not selected as the category winner the gannet image has now been used in publicity material for the 2011 competition.

The winner of the On the Wing category was George Karbus for his remarkable underwater image of a Cory's Shearwater - this and many other examples of his work can be found on his website:
http://emerald-vision.com/
Next
Previous